Sold on First-Year Savings and Greater Uniformity With Pivot Irrigation

K & L Forest Nursery grows pine trees, which can be used for everything from creating oriented strand board (OSB), to building light poles, to providing pulp for paper, to burning as biomass in power plants.

Growing between 18 and 20 million trees per year, Ken Singleton, owner of K & L Forest Nursery, says that while the land and climate in south-central Georgia is perfect for growing pine trees, water is essential at every stage.

His operation watered using solid set irrigation for years. At that time, Singleton would spend all day every other day, monitoring that irrigation, making sure nothing went wrong, or making repairs and adjustments when things did go wrong. After 17 years, he decided to make the switch to center pivot irrigation to help with the frustration and vast amount of time he had to spend with solid set.

Reid Brothers Irrigation in Americus, Georgia, designed and installed a custom Valley® 7000 center pivot for Singleton. It features low drop lines to stay close to the seeds and trees, a high- and low-pressure package for varying wind conditions, and PolySpan® lining to combat the low pH of the well water.

Singleton says about 75 percent of his labor costs could be tied to irrigation when he was using solid set. Pivot irrigation provided such significant time and labor savings that he decided to install a second Valley pivot after just one year of using his first one.

“I can pay for the pivot with the money I would have spent on labor,” he says. “I was looking over my budget, and it’s obvious that the pivot pays for itself very quickly. And, with the improvement in uniformity, I’ve got better profits. The value of my land is up tremendously, as well. If my son doesn’t take over and we want to sell it eventually, having those pivots on my land will help enormously.”

While the labor savings is a huge benefit, Singleton says the freedom pivot irrigation provides him is just as beneficial. “I just have so much more time to spend on other things now, and a lot more free time, too. It’s been incredible,” he says. 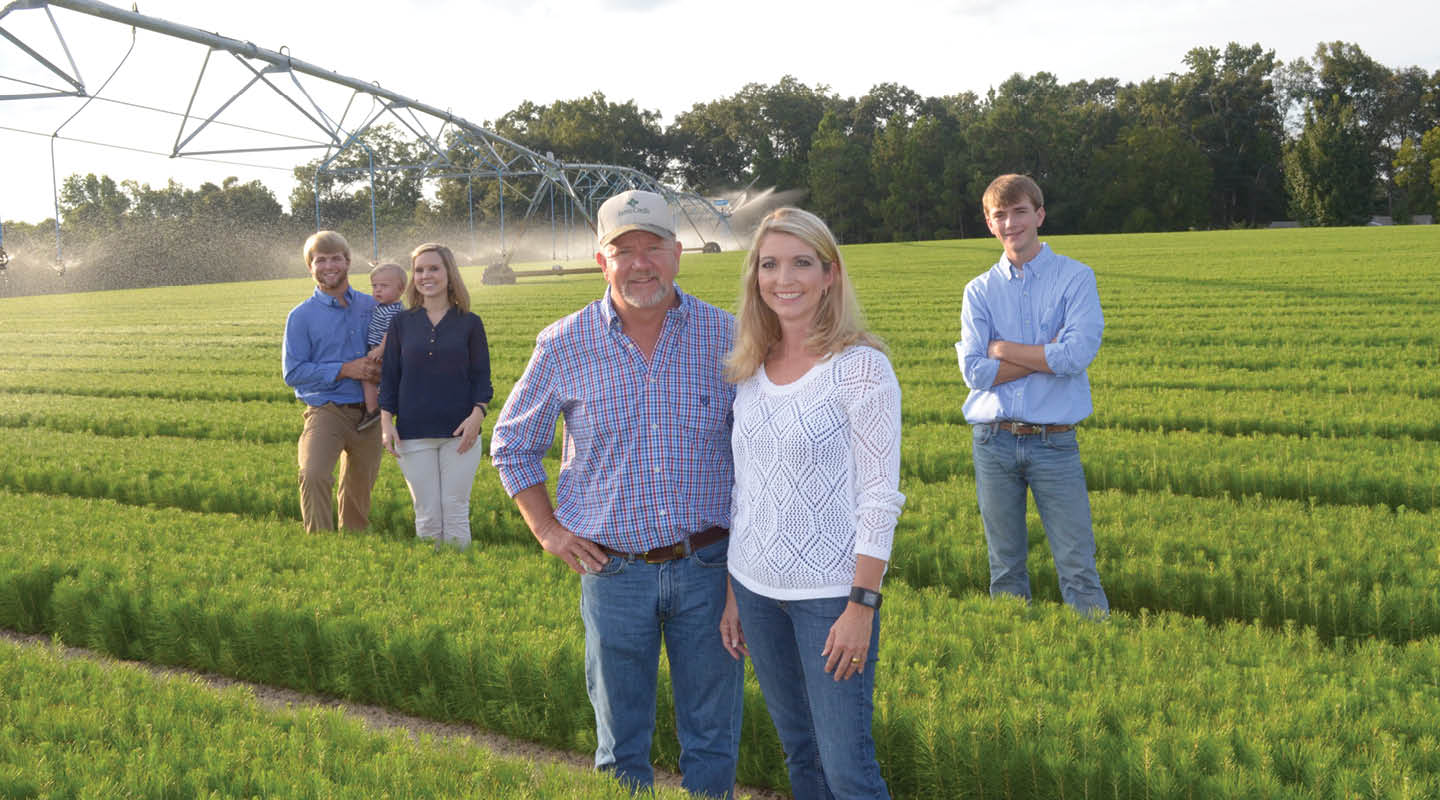 The Singleton family has enjoyed more free time through labor savings since installing their Valley pivots.

Pine trees require an extensive amount of water from the very start. K & L lays the tree seed on the ground in the early spring and covers it with natural mulch, which must remain damp for four to six weeks. During this time, they often run the pivot twice a day at very low pressure, just to ensure there’s enough water to keep the seeds in place during germination.

“Germination begins in April, and that’s the critical time to keep water on it,” explains Singleton. “The seed just sits on a bed with bark mulch over it, and when the wind picks up, the right amount of water will keep the seed from blowing and moving. This year, we were watering just about all day, every day, and shutting it down at night when the wind died down.”

Full germination takes up to 21 days. Once established, the seedlings need about 1.5 inches of water a week, both for growth and to keep them cool in the hot, southern climate. “From the first of July until early September, we’ve got to keep watering consistently, even when there’s enough moisture from the rain,” Singleton says. It’s just so hot here that we need to water to keep the trees cool enough so they can grow properly.” 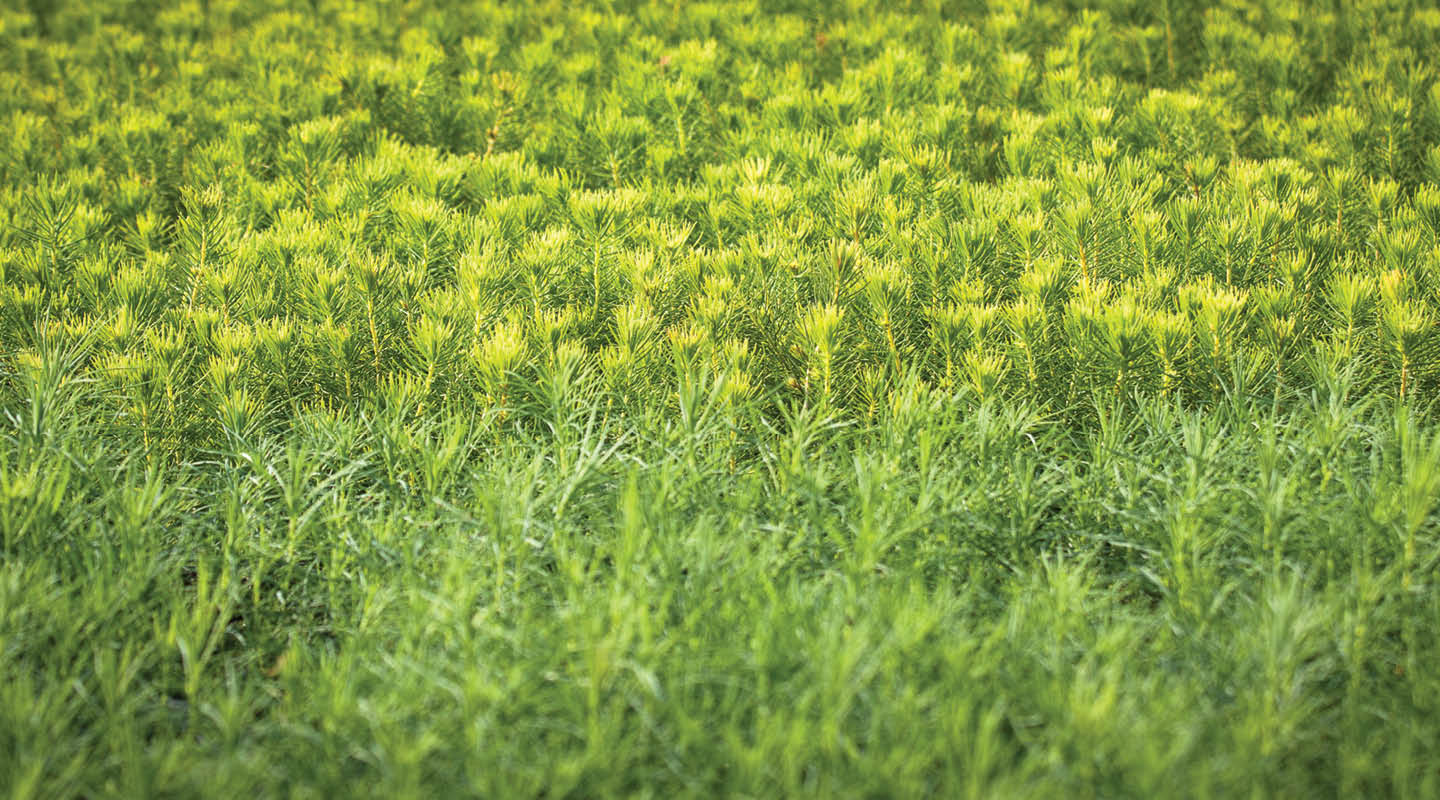 The consistency of center pivot irrigation has improved the uniformity among Singleton's trees, bringing him better returns.

Uniformity is essential to easy harvesting, packaging and profitability of pine trees, and while Singleton didn’t purchase his first center pivot with that in mind, it improved his application uniformity.

“The germination and the uniformity are outstanding now,” he says. “I thought I was irrigating evenly before with the solid set, yet in August and September, I still had some holes. With the conversion, everything is watered so uniformly that there are no deformed trees, which brings me greater returns.”

Lumber is a high commodity crop, but in turn takes a lot of labor. The growing season is only from April to November, when the pine trees reach about 12 inches from the ground up and have roots six inches deep.

K & L expects to have a crop of 19 million trees this year on just 36 acres of land, all of which is now under pivots. The first pivot placed on K & L Forest Nursery’s land covers about 16 acres, and the second covers 20 acres. Singleton says he recently purchased another 20 acres that is currently irrigated with solid set, but not for long. He plans to have every acre that he owns under center pivot irrigation soon.

“We will be capable of producing about 26 million seedlings at that point, and my pivots will keep saving me labor and time, even with the additional land,” he says. I’ve only been using pivot irrigation for a couple of years, but I can tell you that I haven’t found any flaws with it. It’s been a real lifeline for me.”