When discussing his long career with Mike Ames, one thing comes through loud and clear: the gratitude he feels.

“I feel blessed to be involved in ag and in the water business,” Mike says. “Valley® is the best vendor by far. They offer tremendous support. As Valley has grown, it has given individuals such as myself the opportunity to grow with them. I feel really privileged.”

Mike started his own business as a Valley dealer in 1982, and recently replaced the first center pivot he ever sold. It’s a moment he calls “bittersweet,” and one that has caused him to reflect on 35+ years in the irrigation industry.

A Future in Ag

Mike Ames was born in Scobey, Montana, the fourth of five children, but his family soon moved to nearby Glasgow. “I was blessed with wonderful parents and grandparents, supportive of all I did,” he said.

He first got interested in irrigation when he helped out on a local farm in Montana. They used flood irrigation, drawing water from the Milk River. Mike said he wasn’t very good at it, but “I got my feet wet.” (In more ways than one, we’re sure.)

One thing he did know for sure: he wanted to work in agriculture. Beyond that, “the only subject I was good in was math, so I went into engineering,” he explained.

He went to Montana State and got his agricultural engineering degree. The next three summers, he worked at a local Valley dealer, then a Zimmatic dealer, then a Lockwood dealer. “After experiencing all three, I knew I wanted to be a Valley guy. I really appreciated what Valmont was all about,” he said.

After graduation from Montana State in 1981, he worked in Sidney, MT, for six months before moving to Williston, ND in 1982, where he started Agri-Industries. Any farmer who remembers that era can tell you it was a difficult time to start any business, much less an agricultural business.

Mike has impacted communities in both North Dakota and Montana with pivot irrigation and water management throughout his career.

In 1982, interest rates were sky high. Farm commodity prices were lower than buttonweed roots. An embargo on the U.S.S.R. meant exports were down, and other economic factors – including high oil prices – had a negative impact on farms across America.

Mike called himself “young and not very smart” in those days. “I didn’t have the financial wherewithal at that time to meet Valley standards, but as the only Valley dealer in North Dakota, they gave us an opportunity.”

Weather in the region means there is nearly always a moisture deficit, which is, of course, conducive to irrigation. “Growers here rely 75% on irrigation, 25% on rain,” he said. “We’re blessed with the Yellowstone and Missouri Rivers. We can do 90% of our irrigation with surface water, and 10% with ground water.”

Mike shares an amusing anecdote about how Valley blue dominates the landscape: “There’s one area north of Williston with 50 center pivots, and 49 of them are Valley pivots. The one guy who put in another brand regretted it afterward, and his neighbors let him hear about it.”

The irrigated crops in the region are potatoes, malt barley, sugar beets, corn, soybeans, durum wheat and spring wheat, Mike said. But cattle production is also big in the area, especially on the Montana side. A lot if the irrigated acres are silage crops to support the livestock industry.

Mike and Agri-Industries “dealt with some falsehoods in the early days, such as ‘You can’t put on enough water for alfalfa using center pivot irrigation.’” Agri-Industries worked with Dr. Jerry Bergman at the experiment stations in Sidney and Williston, and proved those myths wrong.

“I’ve never had a customer tell me, ‘I wish I’d never put that pivot in,’ but I’ve had quite a few tell me they wish they’d done it sooner,” he said.

Things got better – much better – and Agri-Industries grew and prospered. “I’m grateful our customers stood behind us through the time when we were inexperienced and didn’t have adequate resources,” he said.

In addition, the city of Williston “really got behind value-added ag,” Mike says. “Both Montana and North Dakota support ag. The drawback is the distance from the markets; the freight costs are high.”

In recognition of his 35 years in the industry and his ongoing “efforts to enhance value-added ag in this area, and working with growers,” the North Dakota Irrigation Association honored Mike with its 2017 Irrigation in Excellence Annual award.

“We’ve always been promoting irrigation in Montana and North Dakota, and members voted me as the winner last year,” Mike said with typical, understated humility. “We’re really committed, and we have a very large service and parts department.”

Mike is also quick to credit his wife, Janis, who was his high-school sweetheart. Together, they have five kids: three sons and two daughters, all of whom worked in the business at one time. Two sons-in-law have started their own businesses, and one son still works with a sister company of Agri-Industries. Mike and Janis also have 20 grandkids. “She was a full-time mother and now she’s a full-time grandmother,” Mike said.

Mike has seen a lot of change over the years, from when he first got the irrigation bug with flood irrigation. “Irrigation has changed through better products and automated technology – now you can irrigate a lot more acres. With flooding, you can only irrigate so many. There’s almost no limit now, and we’re a lot more efficient. We’re saving 50% of the water.” 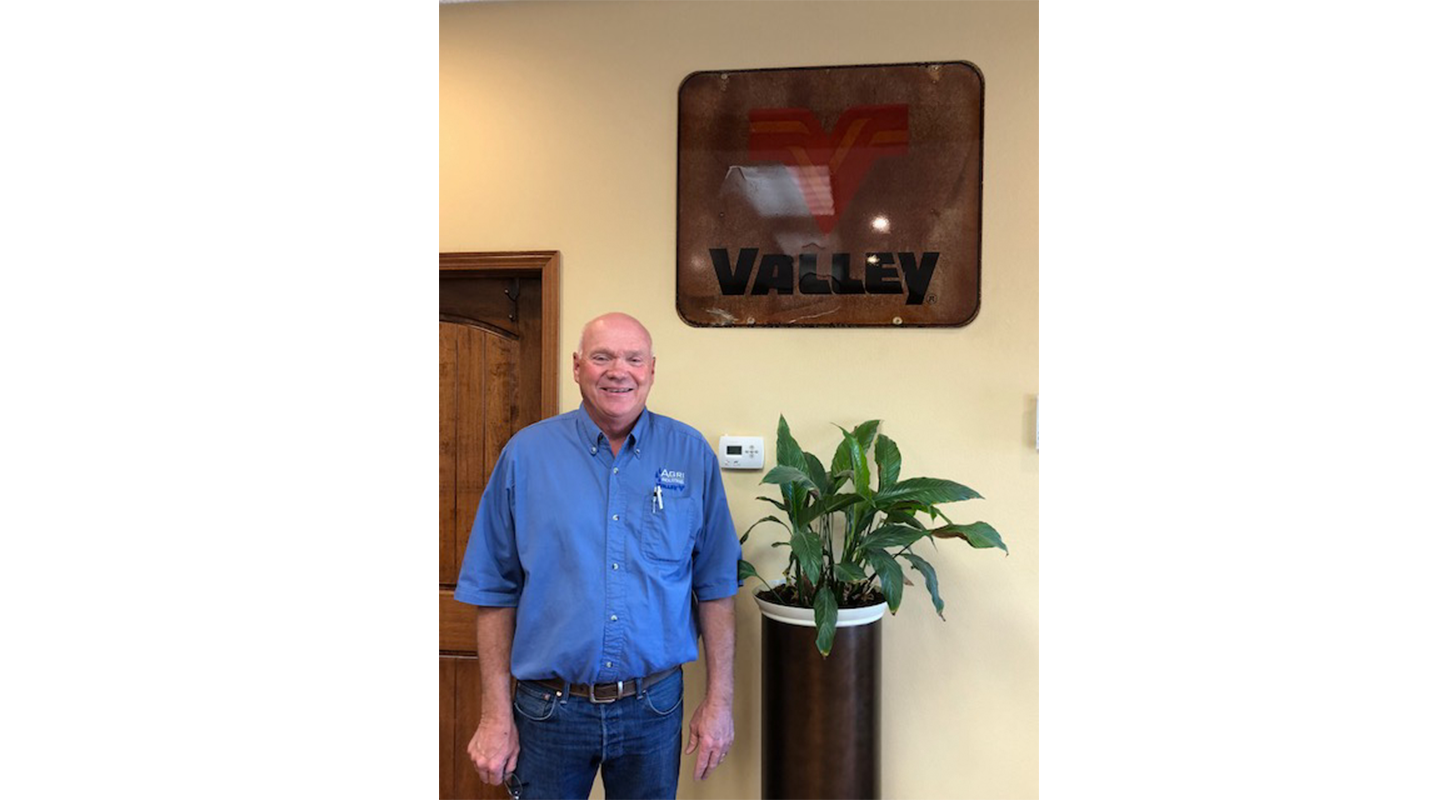 This vintage Valley sign came off the first pivot Mike ever sold 35 years ago. It was only recently replaced.

One of the growers that stood by Mike from the early days just replaced a center pivot after 35 years of service – it was the first Mike ever sold.

“Daryl and Kathy Andersen are just wonderful, wonderful people,” Mike said. “Back in the day, they had to help us build it and bury the pipe. Their son has taken over the operation and he decided to replace it.”

It’s another reminder that things change, but not everything offers the same durability. “I’m grateful that we could put a center pivot out and have it be reliable and dependable for 35 years,” Mike said. “Swathers and balers wear out after five or ten years. But Valley products are the most reliable and dependable. A Valley pivot holds its value and does its job.”