The Walking C Cattle Company is a cow/calf operation that grows crops to supply their feedlot. The farm is run by a tight-knit group – owner Terry Crawford and his family: Corey Bender, his son-in-law, and Larry Fisher, farm manager. 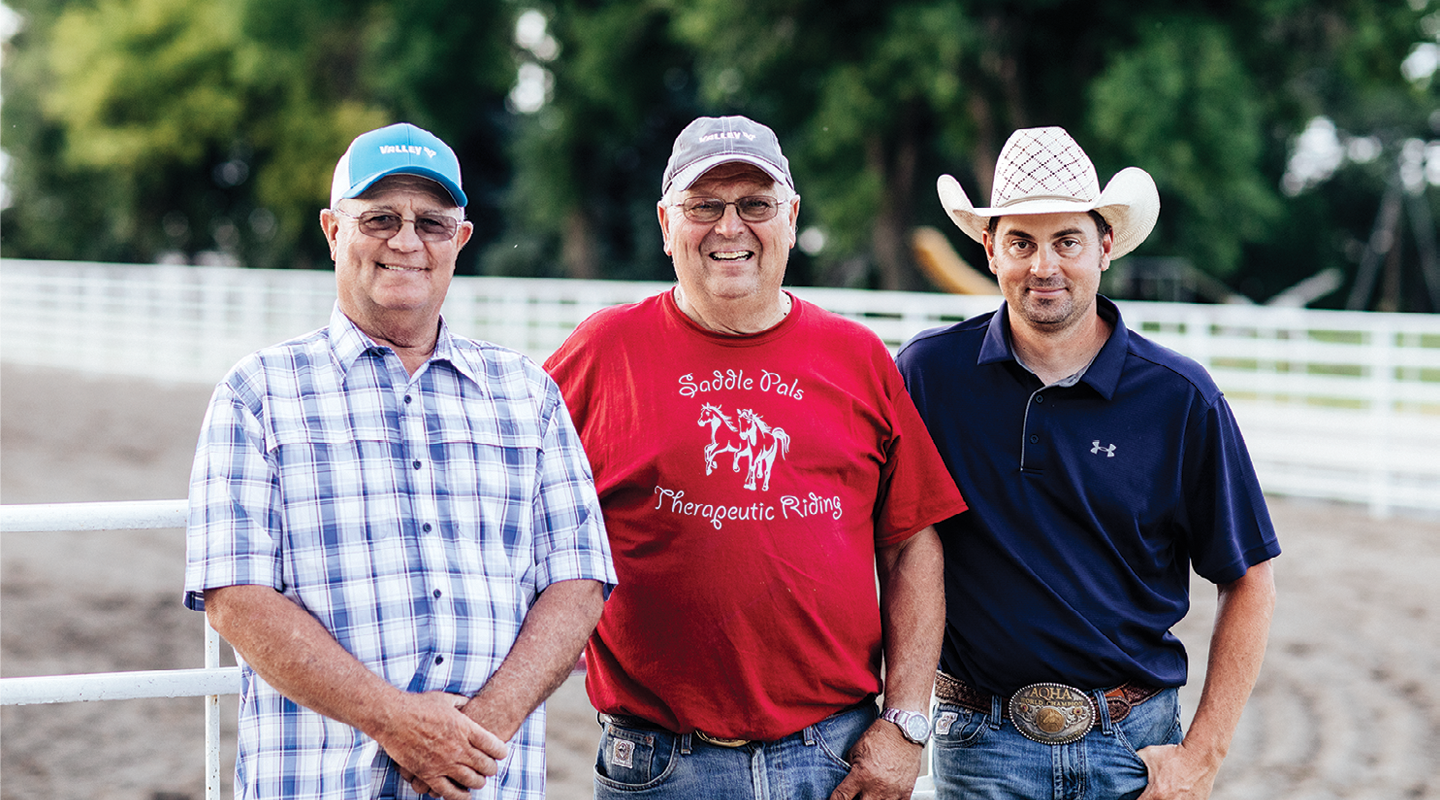 Crawford grew up on the farm and remembers how hard his parents worked to keep it going during the Great Depression. Fields were irrigated by using tubes to transport water from ditches. Crawford’s dad would even sleep at the edge of the field to move the tubes when the water reached the end of each row.

“We got our first pivot from a friend, and it went on from there,” says Crawford. “I always wanted a Valley because it’s the ‘Cadillac’ of center pivots. So, when Central Valley Irrigation (CVI) opened a mile and a half away, we got one. We’ve been buying Valley ever since, partly because it’s a good product, but mostly because of the service we get from CVI. They’re very dependable and always quick to respond when we need them.”

Bender, who has worked for Walking C since marrying Crawford’s daughter 17 years ago, says every added center pivot reduces the labor on the farm. “It’s really changed the way we farm,” he says. “It’s very easy now compared to what it was.”

Fisher has worked for Walking C for 31 years. He says he started as a “flunkie,” making repairs and doing whatever was needed. Today, he’s a loyal and hardworking farm manager who manages the irrigation for the operation. Fisher says Valley helps him run the farm more efficiently.

Operating four different center pivot brands of various ages made irrigation control challenging. “Almost every center pivot had a different panel,” Fisher explains. “That’s one reason we went to the ICONX. All the panels are the same, and I can control them on my phone or walk someone else through it easily. Everyone only has to learn one panel. It’s a great control technology concept.”

The Valley ICONX is designed to bring control technology and management under one umbrella. It takes control of an existing panel using that panel’s circuits, easily integrating any brand of control panel into the AgSense network through AgSense ICON Link.

Crawford says the Valley ICONX is simple to use. “We can control when the center pivot needs to change direction,” he explains. “We can also follow our agronomist’s advice better, and it’s easier to set fertigation, too.”

Bender says the primary benefit of ICONX is increased efficiency. “Larry handles the center pivots, and he doesn’t have to constantly run out to the pivots to check on them,” says Bender. “Or, if we want to turn them off because it rains, we can do that remotely. We’re hoping we’ll save money, fuel and labor as time progresses.”

Fisher appreciates being able to save time and effort by controlling center pivots remotely. “I’m learning on the fly – I just got a smartphone a year ago, and I’m still learning how to run it,” he says. “But using AgSense on my phone is a lot easier than running SnapChat! We’re saving time, labor, fuel and mileage. I can do everything through the phone. Before I go to bed, I check the pivots.”

Fisher used to spend three to four hours every morning checking all the center pivots, but now he can check everything from his phone using control technology when he gets up in the morning. “Then I can double-check or triple-check them during the day. It’s a major time-saving tool,” he says.

Fisher says farmers who have questions about the benefits of using ICONX and AgSense should spend a couple of minutes with him. "I just have to show them my phone,” he says. “You can do virtually everything on your phone. It sells itself.”

Keeping the Future in Mind 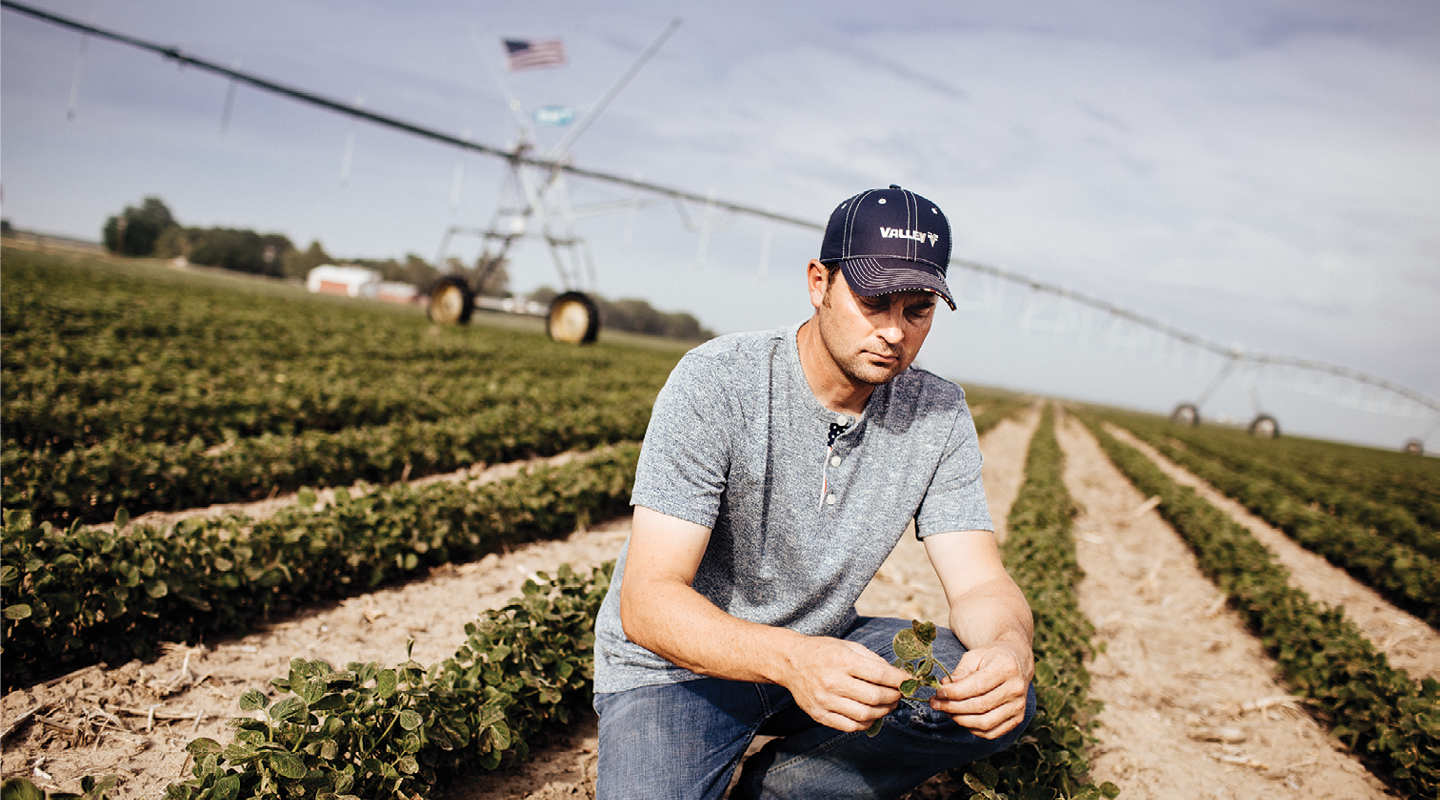 Another reason Crawford invested in Valley ICONX smart panels is to prepare his farm for future generations. “I want to leave a sustainable operation for my kids and grandkids,” he says. “We have to find ways to save time so we can do more. And we’ll have to grow our operation – that’s a given. If you’re not growing, you’re dying. Valley ICONX enables us to grow because we can manage more pivots now.”

Bender, part of that next generation, is also excited about technology. “I think irrigation will change a lot more,” Bender says. “I’m really excited to see what will happen in the future. If my son would ever want to do this, or my nieces and nephews, we need to keep up with the changes. That’s why we’re using ICONX and AgSense.”

Crawford adds, “My dad wouldn’t believe the changes in technology! Who’d have thought 20 years ago that everybody would have a cell phone? I’d love to see what my grandkids will have in the future.”